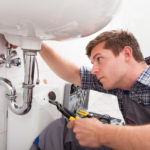 Every homestead relies on a plumbing system to deliver or draw out water throughout the house i.e. in the kitchen, showers and other parts like sinks. You will become alert when the pipes that are supposed to dispose water start making very irritating and strange noises throughout the day. These plumbing noises are annoying and startling. In most instances, these noises indicate a severe plumbing issue. What message are your plumbing pipes trying to convey? In this text, we will note the common noises made by plumbing pipes and the possible solutions to this menace.

Banging noises from plumbing pipes is a result of water pressure. The flow of water can also cause this fault. Two of the culprits in this problem is the trapped air bubbles and water hammers. A water hammer results when a valve or faucet is suddenly shut. Now, the water that was flowing towards the exit had already acquired a high momentum. When the water meets the closed valve it results to a loud bang. Water hammers can also cause a series of smaller bangs in the pipes.

Air trapped in pipes is as a result of issue related to water lines. If banging is a result of air trapped in the pipes, the banging noise will automatically occur when you turn the faucet on. Also, you may witness sputtering as the trapped air bubbles move. These issues may be a future disaster so you need to call in some plumbing services la mirada ca for a professional check-up.

When the water pressure is high than the system’s capacity, it may leave pipes vibrating. The vibrations may result in creating a humming noise particularly when the water is running. High water pressure occurs in almost all homesteads. However it’s rampant on homesteads that require large volumes of water. Homes that have a well should check the pressure exerted at the tanks. Technically, the setting should not be more than 55 pounds an inch. Pressure should be checked and adjustments made where necessary to cut out the humming sound.

When the plumbing pipes experiences difficulty in draining, the pipes protest over the matter with a gurgling sound. The gurgling noise is an indication of an obstruction that has settled in the pipes. The obstruction maybe an item that has accidentally been washed and drained in the pipes building up other debris, scum and other hard water deposits on the sides of the plumbing pipes.

Plumbing pipes mostly travel behind walls, under the floor and on the ceiling. Pipes that are suspended are always well secured and fastened. If the fastener gets loose or happens to fall off, you will be alarmed by a rattling noise when the water travels in the pipes. The sound occurs in a hidden pipe. This might require you to hire a plumber to come trace the source of the annoying noise. Professionals are versed with such hectic problems. They will use their experience to put an end to the noise.