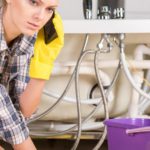 If you’re a homeowner, then you are probably well aware that plumbing problems occur at the worse possible time. Sometimes it seems like there is no end to the number of clogged drains, leaky faucets and bursting pipes that can exist in one home. Whether your home is new or old, it’s important to take care of your plumbing system in order to mitigate potential problems.

For starters, if you have a leaky toilet, there’s more than one reason to take care of it as soon as possible. It’s estimated that a leaky toilet can waste nearly 80,000 gallons of water each year, which is more than enough to raise your water bill significantly. You probably won’t be surprised to know that a leaky toilet is one of the most common plumbing problems that exist. Usually when there’s a problem that involves a toilet, it’s not the actual toilet itself, which can last for decades, but it’s leaking water.

One of the things that you might want to do to resolve the issue is replace the flush valve, which is a relatively easy project and it only costs a few bucks. If you’re not sure that a leak is the problem, you can test it the old fashioned way by putting a small amount of food coloring in the tank at night and checking the bowl in the morning. If there is in fact a leak, you’ll see color in the bowl the following morning. The supplies needed to replace the flush valve can be found in just about any hardware store.

It’s no secret that showers and tubs often get clogged with hair – it’s just a fact of life. While you can absolutely use plunger to unclog the drain at no costs, except for the price of the plunger, you can also use a wet and dry vacuum to resolve the issue; it’s great at getting rid of the gunk in the shower or tub drain. You’ll want to be proactive when it comes to clearing out drains so that you don’t exasperate the problem.

If you have culinary skills, then there’s a chance that you spend a lot of time in the kitchen cooking up amazing meals. Unfortunately, that increases the chances of having problems with waste disposal because things like grease and other cooking oils that tend to get stuck in pipes. This can cause a serious problem if you’re not proactive. Fortunately, there’s a chemical-free way to solve the problem that involves running boiling hot water through the drain to get rid of the grease that has accumulated. It usually only takes a few gallons of boiling water before things are back to normal.

Getting The Right Plumber To Cut Your Costs