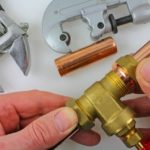 It’s been a coveted commodity for centuries, and now homeowners are quickly finding that copper is the ideal home pipeline for the transport of drinking water, gas, heating and for fire-fighting systems. In fact, besides PVC, copper is probably the most widely used pipe material in the United States. The metal is widespread due to its reliability, durability, and safety, and according to one certified plumber Annapolis MD residents that are looking for modernized systems should consider upgrading their homes.

Copper has been used for centuries, mostly because of several strengths;

Reliability and durability: copper is a material known to be long-lasting. Resistance: withstands high and low temperatures, wind pressures, and can be exposed to the outdoor elements including UV rays, air, and temperature changes. Versatility: it meets a wide range of safety requirements. Copper can be used for traditional and radiant heating, gas and drinking water transport, air conditioning and refrigeration fluids, fire protection systems and geothermal needs. Energy saving: thanks to its excellent thermal conductivity, copper is the best material for pipes that must yield and subtract heat. Health: composed of 99.90% minimum copper, it does not contain additives, dyes, or volatile organic compounds.

More importantly, copper’s surface is said to kill bacteria and other pathogens because it has antimicrobial effects. Worldwide, hospitals are using the metal to diminish the number of resistant germs, including many viruses, algae, and fungi. Every year, hundreds of thousands of patients are infected with dangerous pathogens, which can lead to wounds or pneumonia, and thousands die each year from these infections. Studies confirm there are fewer pathogens on copper-based items.

An Effective Preventive Around The House

According to several professional plumbers, upgrades to copper piping is increasingly being requested. General disinfectants that include ingredients like alcohol are only effective for a short time, they evaporate and are not as effective. A copper surface, for example, like water pipes, faucets, door handles or even light switches, however, provide around the clock disinfecting.

Is Copper a miracle metal? Some say yes. Egyptians knew about the effect of copper. With chips of the metal, they disinfected their drinking water and relied on copper for various illnesses as well. The Greeks treated infections with copper, the Roman wounds, ulcers, and skin ailments, and for the Aztecs, copper was an important tool in medicine, especially in mouth and throat infections. Today, more and people are using the metal in their homes, especially where vulnerable adults and children live.

Many homeowners are starting small with upgraded plumbing like faucets, shower heads, and some outdoor piping, and others are performing complete overhauls to modernize their homes. Copper pipes cost more than your standard PVC piping, but when you realize all the benefits, it’s completely worth the costs. Experts say while copper pipes can bring about a 20 percent increase in your home’s value, one of the most important factors of upgrading to copper piping is the health benefits.

How to Care for Your Plumbing System Like an Expert